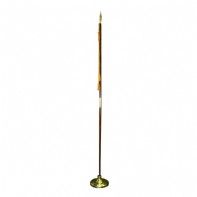 It is true that all Americans feel a great sense of national pride. Whenever the country needs to come together and show unity, you can drive by almost any home and see the Stars and Stripes proudly displayed. But that doesn't mean that Americans don't also feel the same type of pride for their home state. It is the contribution of each of the fifty states that helps make this country one of the most successful, dynamic, and adaptable countries in the world.

State flags not only help you show your pride for your state, but also help you learn the history and diversity of each state from Alabama all the way to Wyoming. For instance, if you were to look at this Nyl-Glo Annin Pennsylvania flag, you'll notice in the middle is a shield that contains a ship, plow, and three stalks of wheat. This shield is actually the family shield of William Penn, who was of course the original founder of the Pennsylvania colony.

Did you ever wonder why the Nyl-Glo Annin California flag contains the image of a bear? That is because when California was still under the control of Mexico, American pioneers launched a revolt to overthrow the Mexican garrison. In need of a flag, William L. Todd drew a bear on a piece of cloth. When the garrison was overtaken, the bear flag was hoisted and has been flying as the symbol of California ever since.

FlagStoreUSA.com has flags for every single state, including American Samoa, Guam, and Puerto Rico.

Show Pride for Your State